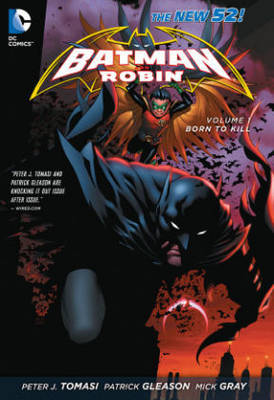 This is a New York Times Best Seller! As a part of the acclaimed DC Comics - The New 52 event of September 2011, Batman begins battling evil with his son, Damian, at his side, Batman now realizes that the hardest part of the job may be trying to work together! As Batman and Robin try to adjust to their new partnership, a figure emerges from Bruce Wayne's past: His name is NoBody, and he's not happy that Batman Incorporated is shining a light on his own shadowy war against evil...This volume collects issues numbered 1-6 of Batman and Robin, part of the DC Comics - The New 52 event.

Peter J. Tomasi, a life-long New Yorker, is an NYU grad with degrees in political science and filmmaking. Peter has helped re-imagine many characters and books over the course of his extensive and exclusive career at DC Comics as a writer and editor. Peter's newest projects are "Batman & Robin" and "Green Lantern Corps," both a part of DC Comics--The New 52. His previous works include "Brightest Day Green Lantern: Emerald Warriors, Batman: Blackest Knight, The Outsiders, Nightwing, Phantom Stranger, Black Adam The Dark Age" and "Final Crisis: Requiem."