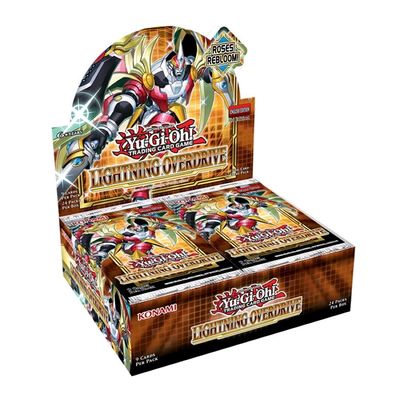 Scheduled release date is May 13th, 2021. Stock levels do not reflect the actual ordered amount.


Lightning Overdrive is poised to shock the Dueling world and reinvigorate not one, but TWO beloved monsters from the worlds of the Yu-Gi-Oh! animated series!


First, Number 39: Utopia from Yu-Gi-Oh! ZEXAL gets a brand-new version of its upgraded Number C39: Utopia Ray form! Alongside comes a new suite of supporting cards that help you Summon Utopia as well as fetch "ZW" monsters and "Rank-Up-Magic" Spells out of your Deck.


After that, Lightning Overdrive rewinds time to Yu-Gi-Oh! 5D's, and introduces a new upgraded form of Akiza's beloved Black Rose Dragon! This monster will also be joined by a small retinue of "Rose Dragon" related cards to aid your Synchro Summons.


But it doesn't stop there! A brand-new strategy invites all Duelists to explore the excitement and mystery of a monster-themed amusement park, and the story of Fallen of Albaz that began in Rise of the Duelist continues onward.