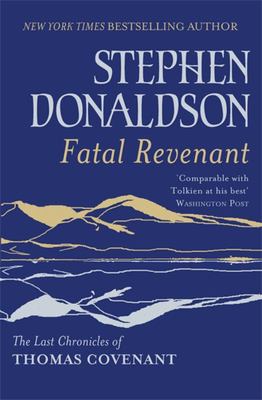 Fatal Revenant, Book Two of "The Last Chronicles of Thomas Covenant," begins where The Runes of the Earth ended: Linden Avery watches from a balcony while Thomas Covenant and her adopted son, Jeremiah, ride desperately toward Revelstone. But their reunion has vast consequences which she could not have foreseen. Soon she is betrayed by the people whom she most needs to trust. Transported deep into the Land's past, she is forced to confront mysterious strangers, legendary heroes, and ancient evils, and to stand alone against the malevolence of the Despiser's minions. Abandoned in Garroting Deep, the most bloodthirsty of the Land's long-dead forests, she reaches a fearsome decision: she determines to reshape reality in an attempt to end the Despiser's evil and her son's suffering. However, her purpose requires her to find Loric's krill, a weapon abandoned among the Hills of Andelain millennia ago. And she needs the aid of friends and allies who will turn against her if she reveals her intent. Attacked by enemies old and new, and harried by strange beings with ambiguous agendas, she strives toward Andelain. But the ravenous skurj are rising, and all of her actions appear to serve her worst foes.

Return to the Land, and Linden Amory's quest to rescue her son and save the Land from the Despiser!

Stephen Donaldson lived in India for 13 years with his father, who worked extensively with lepers; it was here that he conceived the character of Thomas Covenant. He was awarded the JOHN W. CAMPBELL AWARD as Best Writer of the Year FOR THE CHRONICLES OF THOMAS COVENANT THE UNBELIEVER, which, with the sequel trilogy, became instant bestsellers. He is also the author of the fantasy duology Mordant's Need, the SF epic quintet The Gap, and a number of mysteries.